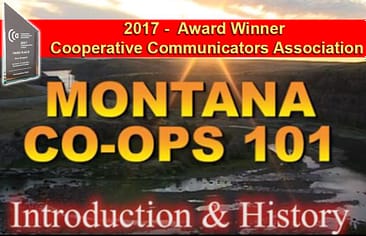 “Montana Co-ops 101: Introduction & History” won third place at the 2017 Cooperative Communicators Association awards competition in Baton Rouge, Louisiana.  The video documentary, jointly sponsored by the Montana Council of Cooperatives (MCOC) and the Montana Cooperative Development Center (MCDC) is the first in a series that is available exclusively to MCOC member organizations for educational purposes. 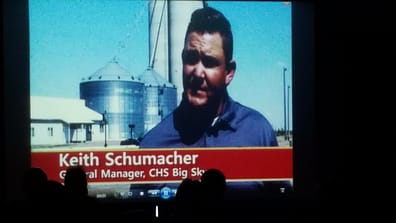 A panel of broadcast journalists and film producers viewed the MCDC production along with several other co-op produced videos entered into the contest.  All entries were judged in four categories: design & graphics, writing, technical elements and success in effectively informing their intended audience.  “Montana Co-ops 101: Introduction and History” received an excellent rating in all four categories, which resulted in an overall score of 91 out of 100 points.  This placed the Montana production in the top three documentaries of the contest.

The judges noted that the MCDC video is a “Really well-done piece on what the cooperative business model is and how it has impacted Montana.” They went on to add that they “Loved the diversity in the co-ops highlighted in the piece.”

“Montana Co-ops 101: Introduction & History” features co-op leaders from six established businesses who each share their history and explain how their cooperatives have provided essential services to their members in rural Montana.

MCOC member organizations can watch a preview of the video on the MCOC website before registering to receive a link to view the entire documentary.

In his role Jason leads CoBank’s Minneapolis and Fargo Banking Centers, which provide over $5 billion of financing to farmer-owned cooperatives and other middle market agribusinesses across five upper Midwest states. Additionally, he leads CoBank’s Coop Start initiative that targets small and emerging cooperatives across the country, and serves on the boards of the Agricultural Retailers Association and the Ralph K. Morris Foundation. Prior to joining CoBank in 2007, Jason was a relationship manager in US Bank’s Food and Agribusiness Group where he worked with agribusinesses across the US. Jason holds a B.S. in Agricultural Business from the University of Wisconsin-River Falls, an MBA from the University of North Dakota, and is a graduate of the Stonier Graduate School of Banking at the University of Pennsylvania.

James J. (Jim) Wadsworth is an agricultural economist with USDA’s Rural Business-Cooperative Service agency. He serves as the branch chief of the Cooperative Services Branch of RD’s Business Development Division.

Jim began his USDA career with the Agricultural Cooperative Service in 1988, and was raised on a 600 acre, 70-cow dairy, crop, and orchard farm in Farmington, Connecticut. He has a bachelor’s degree in agricultural industries from Southern Illinois University and a master’s degree in agricultural economics from the University of Connecticut. He also once worked in management for Agway, Inc., which at the time, was the largest farm supply cooperative in the United States.

Debbie has been with USDA since May of 1999. In January 2021, she joined the National Office Staff in the Cooperative Services Division. Prior to that she served as a Business and cooperative Program Specialist for the Ohio State Office. She was responsible for the direct and guaranteed loan making, and servicing, as well as many technical assistance and grant programs within Rural Development. Prior to joining USDA, Debbie worked for Cooperative Extension in an eight-county area of Northwest Ohio focused on farm management and business planning, and Cornell Cooperative Extension of St. Lawrence County New York as a dairy and livestock agent. Ms. Rausch received her Bachelor of Science in Dairy Science and a Master of Science in Agricultural Economics both from The Ohio State University. Ms. Rausch and her husband are currently the 4th generation to steward the family farm in Central Ohio.

Nicole Borner grew up in Roundup, Mt roaming the prairie and hills of the Bull Mountains with her siblings, horses and dogs. She is the owner of NMB Enterprises and works with organizations and local businesses on economic development projects, marketing and customer relations. Nicole served as an Alderman for the City of Roundup for 2 years and a County Commissioner for 6 years.

Kathleen Williams has enjoyed a 38-year career in economics and natural resource planning and policy spanning the public, private, and non-profit sectors. She is deeply rooted in Montana, having served as lead legislative staff for water, mining, and recreation policy, run a statewide water resources program, and helped various organizations with program review and strategic planning. As a state legislator, she served as Vice Chair of the Agriculture Committee and passed legislation to improve health care and infrastructure, grow and diversify Montana’s economy, and advance local food production systems.

Adam J. Schafer joined Montana Department of Commerce as Deputy Director in September, 2020. Prior to that he served in the Governor’s Office as a Deputy Chief of Staff, Senior Advisor and Director of Public Engagement. Previously he served as Montana’s Deputy Commissioner of Securities and Insurance and Chief of Staff for the Commissioner. Schafer served as executive director for the National Caucus of Environmental Legislators in Washington, D.C. for 11 years, before returning to Montana in 2012. He was born in Great Falls and grew up in Billings. He received his degree from North Central College in Naperville, IL, and lives in Helena with his wife Anjenette and son Leo.

Lad Barney currently serves as the Montana Business & Cooperative Programs Director for USDA Rural Development.  Prior, he served as Area Director for RD Missoula & Kalispell offices since August 2008.  Lad has also worked as the Director of the Small Business Development Center at the Kalispell Chamber of Commerce for five years.   In late ‘90’s and early 2000’s, Lad was Operations Manager and Lead Sales Consultant for two technology solution providers – one in Kalispell, MT and one in Vancouver, WA, in addition to starting a technology-based Montana business immediately after degrees from the University of Montana.    Go Griz!

Jim has been with Montana Department of Agriculture since 2015. Initially joining the team to manage the Specialty Crop Block Grant program he and his team now oversee all business and market development grants for the Department. Programs include the Growth Through Agriculture grants and loans; the Food and Agriculture Development Centers; Specialty Crop Block Grant and Student Loan Assistance. Additionally, Jim has also overseen the implementation of Covid relief funding through the Montana Ag Adaptability Grant, the Montana Meat Processing Infrastructure Grant and the ARPA Ag Infrastructure Grant.

In his free time Jim enjoys skiing and enjoying the outdoors with his wife Kiley and dog Merle.

Caitlin Jensen is the Executive Director of Zero to Five Montana, a statewide early childhood policy organization working to stabilize, innovate and build the early childhood system in Montana so families and communities can thrive.

Karen Smith is the SVP and Chief Advocacy Officer for Montana’s Credit Unions, the trade association for Montana’s credit unions.  Karen oversees Credit Union Advocacy (Philosophical, Philanthropic and Political) and Communications support that Montana credit unions receive from their trade association and ensure that those services are provided in a timely, cost effective, and useful manner.

Prior to accepting this position in 2019, he served as Assistant General Manager of the Association, a position he had held since going to work for MECA in 1993. His work in these 26 years was focused mostly on lobbying for the association.

Before joining the electric co-ops, Gary served as an energy & public lands legislative aide for five years on Capitol Hill in Washington, D.C.

In addition to his CEO duties, Gary also serves on the Montana Chamber of Commerce board of directors.

A graduate of the University of Montana with a degree in journalism, Gary worked in the newspaper business in western Montana for nearly 10 years – first as a news reporter and then as a managing editor. He later helped start a semiweekly newspaper in southeast Arizona.

Gary is a native of Glasgow, Montana.

His wife, Pamela, is a native of Billings. They have two grown children who are married and they enjoy very much time spent with their three grandchildren.

Geoff has been General Manager of the Montana Telecommunications Association (MTA) since 1998.  MTA offers public policy analysis and advocacy; education and training; and communications services for Montana’s locally-owned community based broadband providers.

As a native of Wisconsin and graduate of the University of Wisconsin – Madison, Brad has spent his entire career working for cooperatives across the midwest and now in the west.  He has spent 20 of his 35 year career in cooperatives leading 4 different local farm supply and grain cooperatives.  Currently he serves as the CEO of Rocky Mountain Supply Inc. with headquarters in Belgrade, Montana.  Rocky Mountain supply is a farm, ranch and consumer supply cooperative with revenues of approximately $140 million and employs 180 hard-working Montanans.  Rocky serves southwest Montana through facilities located in Belgrade, Dillon, Townsend and Ennis.  Rocky Mountain Supply is also 50% owner of Montana Energy Alliance, a joint venture with Vigilante Electric Cooperative in Dillon, Montana.  Montana Energy Alliance serves farmers, ranchers and consumers with their propane needs in southwest Montana.

Linda has been the manager of Big Flat Grocery for 5 years and is active in the local community (served 4 years on Turner School Board, 11-year 4H leader, 15-year board member of Big Flat Community Development Group). She operates a farm/ranch/outfitting business with her husband Miles.

Ben lives in Glasgow with his wife, Connie. They have two children and four grandchildren with one more on the way. Ben along with his family own and operate Busted Knuckle Brewery in Glasgow and Williston, ND.

A native of Eureka, Montana, McIntyre served 12 years as the Lead Economic Developer for North Lincoln County. During her tenure, she averaged over $1 million in investment into the community annually, counseled over 35 businesses every year, led the creation and development of a Business Incubator and provided leadership for the Tobacco Valley Industrial District. McIntyre also worked on other projects, including major infrastructure, trails, amenities, business attraction, economic development, and workforce training that have all positively impacted the community of Eureka.

Ashley joined the Montana State University Extension Local Government Center (LGC) in July 2014 and currently serves and the Associate Director. She manages the certified education programs the LGC offers for local government officials, provides governance and leadership workshops, and is developing new educational tools to enhance the LGC training offerings. Ashley earned her bachelor’s degree in Business Management from Montana State University in 2012 and her Master of Business Administration degree from the University of Montana in 2017.